Archive for category Knitting in the News

Posted by Mylynedj in Knitting in the News on November 29, 2013 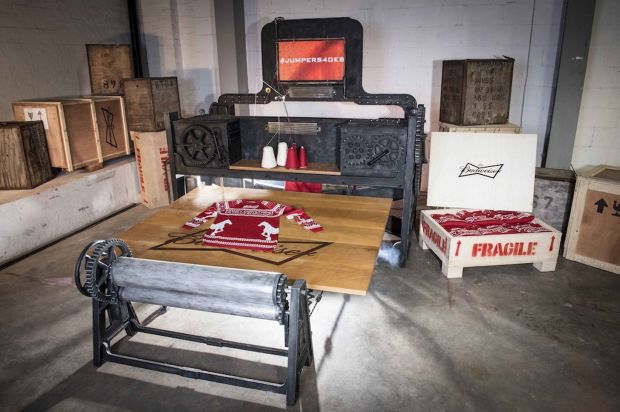 Knitting machine, Knitbot, is Budweiser’s way of promoting UK’s designated driver program with their take on Christmas jumpers (sweaters).  Each time the hashtag, #jumpers4des, is sent via Twitter, Knitbot knits more of these red and white jumpers.

Posted by Mylynedj in Knitting in the News on February 22, 2013

Since the release of the Flyknit Racer, the first collection of Nike’s Flyknit technology shoes blogged here, Nike refusing to rest on its laurels launches the Flyknit Lunar1+.  This new running shoe, designed for everyday use, combines the Nike Flyknit with a resilient foam called Lunarlon.  This plush, responsive material provides support as well as ultra-soft cushioning as well as springy response.  The Nike Flyknit Lunar1+ will be available beginning in February.

Posted by Mylynedj in Knitting in the News on February 8, 2013

Many think that sex is a great calorie-burner, however, a study conducted by the University of Alabama at Birmingham proved this popular myth wrong.  This is based on the assumption that people were engaging in hot love sessions that lasted an hour or longer when the reality is, on the average, people spend six minutes per sexual encounter. This correspondingly amounts to burning merely 21 calories, compared to burning 25 calories by standing up for ten minutes.

On the other hand, knitters who can work those needles burn 55 calories for half an hour.  Also, busy hands make for less munching.  To burn even more calories while knitting, work your abdominal muscles. Sit tall and place both feet on the floor. Support your lower back with extra pillows behind you, if needed. Tighten your abs and hold them in for as long as you can. The longer you hold the contraction, the more intensely you work your abdominal muscles, the more additional calories you burn.

So next time you want to get a good work out get out of bed, take a hold of your knitting needles, a ball of yarn and sit for a couple of hours.

Posted by Mylynedj in Knitting in the News on January 25, 2013

Crocheted Lions Commissioned to be Part of Cultural Olympiad

Posted by Mylynedj in Knitting in the News on May 4, 2012

Knitting and Crocheting to Cope with Disaster a Year Later

Posted by Mylynedj in Knitting in the News on March 11, 2012

A year has passed since the Great Northeastern Earthquake and Tsunamis of 2011 which I blogged about here.  More than 3,000 are still missing and more than 100,000 who remain displaced are now dwelling in temporary housing built by the government.  Among these are a handful from the fishing village of Shichigahama, Japan who meet every Tuesday night to knit and crochet.  This group, called “Yarn Alive,” organized by missionary Teddy Sawka help these women cope with loneliness and disturbing thoughts about the past and of the future.  Watch videos here and here.  Also check out photos here. 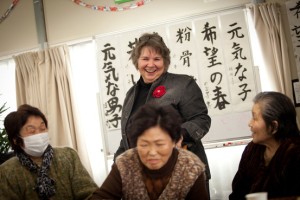 Posted by Mylynedj in Knitting in the News, Yarn Bombing on March 9, 2012

Yarn bombing, yarnstorming, graffiti knitting, guerrilla knitting, and urban knitting all mean the same thing.  It is a form of street art or graffiti in which yarn or cloth are employed for artistic or political expression, instead of paint or chalk.  Yarn bombing has an advantage over other forms of graffiti in that it is not permanent and non-defacing, hence is said to be cleaner and more environmentally friendly.  Early examples were recorded as early as 2004 in Netherlands and has since spread worldwide.

Photos below show details of a recent yarn bombing in Saltburn, North Yorkshire, England featuring different Olympic events tied onto a 50-yard long scarf along the town’s pier railings.  As with the identity of other forms of graffiti, the yarn bomber responsible for this epic-sized graffiti  remains anonymous. 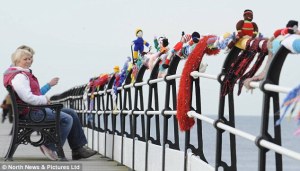 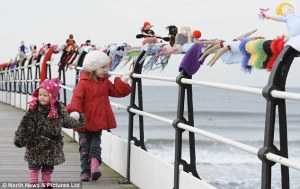 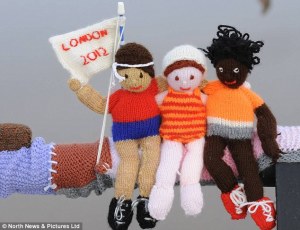 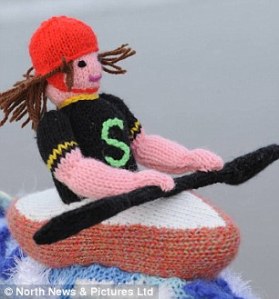 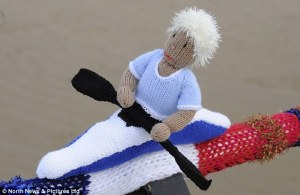 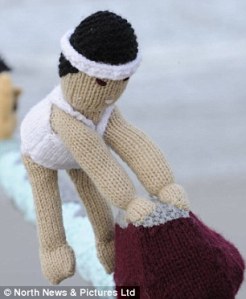 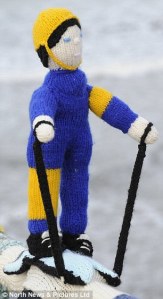 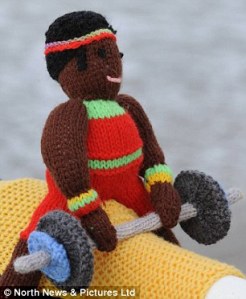 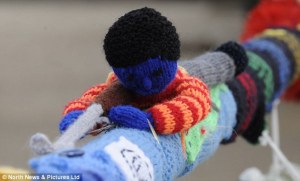 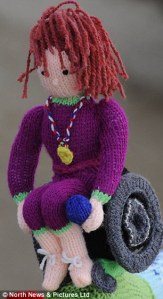 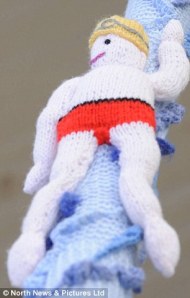 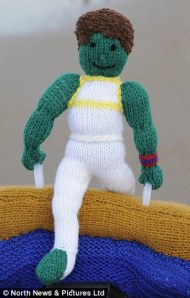 Posted by Mylynedj in Knitting in the News on February 24, 2012 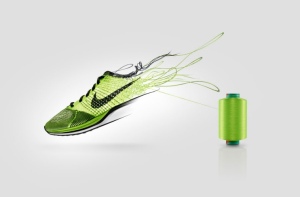 What started out as a quest for the ultimate running shoe– one which possesses a sock-like fit took Nike four years and teams of programmers, engineers, and designers to develop.  The result– a unique, featherweight, precision-fit upper which employs a complex combination of flat-knitting techniques such as short row knitting, intarsia, jacquard, tuck stitches and stitch transfer and binding-off.

Unlike its predecessors where the knitted shoe upper panels are knitted side by side and are later cut from the fabric and seamed before being attached to other shoe components, the Flyknit’s upper appears to have been released from the flat knitting machine in a single, unwasteful piece, making it yet environmentally sustainable. 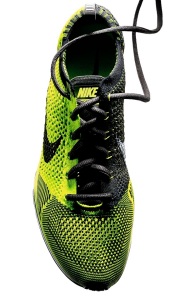 “Yarns and fabric variations are precisely engineered only where they are needed for a featherweight, formfitting and virtually seamless upper. With all the structure and support knitted in, the Nike Flyknit Racer’s upper and tongue weigh just 34 grams (1.2 ounces),” Nike said in a press release. 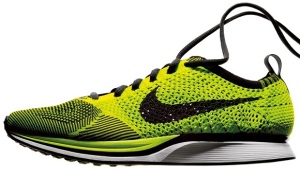 This groundbreaking lightweight line of shoes is scheduled to be released in July 2012.  Will it measure up to Nike Zoom Streak at the Summer Olympics in London?  We’ll soon find out.  But one thing’s for sure– Grandma’s knitting has come a long way.